A Vigil for Three Black Muslims murdered execution-style in Indiana

On Feb 24th, Taha Omar, Adam Mekki, and Muhammad Tairab, Sudanese-Americans from a predominately Muslim community, were murdered “execution-style” in Fort Wayne, Indiana. There was little media coverage or outcry of community support for the horrible crime committed against these young black men. The media quickly painted a “black thug” narrative and at least one University’s MSA canceled a scheduled vigil for the young men.

As a response, a vigil and march was organized in the memory of “Our Three Brothers” by Black, People of Color and Muslim organizers in Durham, NC on March 8, 2016. The march started at Ibad Ar-Rahman Masjid on Fayetteville Rd and marched to North Carolina Central University. Participants held banners and chanted slogans in protest of anti-black racism and islamophobia. The march was supported by residents, passers-by and students, mostly Black and People of Color.

Learn more about this tragedy here:

““There is definitely a reason why my cousins and friend are not getting as much media coverage, and it is because they were black,” Dahab says, in an exclusive interview. “There is discrimination in the Islamic community on who is really a legitimate Muslim and there is a belief that if you are not from the Middle East, you are not as Islamic as someone from Saudi Arabia for example,” he continues.”
http://www.okayafrica.com/news/our-three-brothers/ 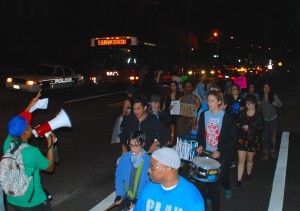 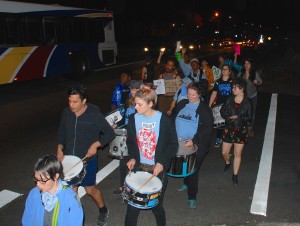