On October 25, 2015, a counter-Confederacy rally was organized in response to pro-Confederacy/protect-Silent-Sam action by Alamance County Taking Back Alamance County and Orange County Taking Back Orange County.  Pro-Confederacy groups also expressed an opposition to Muslim refugees’ arrival in North Carolina. This was likely in response to Chapel Hill Mayor Mark Kleinschmidt’s co-signing a letter to the US President urging Syrian refugees’ settlement in Chapel Hill, North Carolina.

The counter-Confederacy/anti-racism action was organized and led by Black students at the UNC-Chapel Hill and supported by peace and justice allies throughout the Triangle Area of North Carolina. The following is a video from that action by Movement to End Racism and Islamophobia. Excerpts from the following video were quoted and broadcast by Public News Service – a member-supported news service that advocates journalism in the public interest.

MERI partner organization, Jewish Voice for Peace – Triangle NC, issued a statement in response to the pro-Confederacy rally. This statement makes a connection between white-supremacy and the Israeli occupation and calls for support for #BlackLivesMatter and Palestinian resistance. JVP – Triangle NC member, Noah Rubin-Blose, read the statement during the rally. 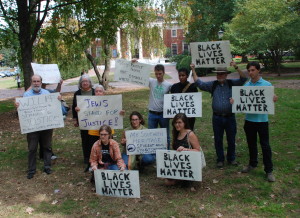 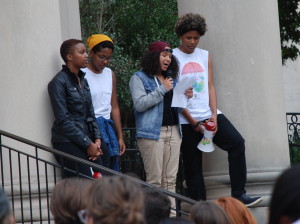 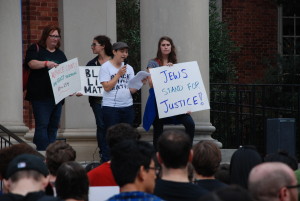 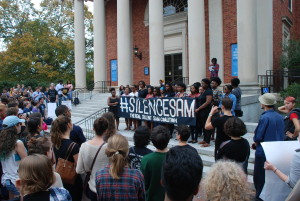 Pro-Confederate Groups to Rally in Chapel Hill on October 25
http://www.carolinamercury.com/2015/10/pro-confederate-groups-to-rally-in-chapel-hill-on-oct-25/

Jewish Voice for Peace (Triangle, NC) calls for resistance against racism in the USA and Palestine
https://jvptrianglenc.wordpress.com/2015/10/23/jews-show-up-for-justice-and-resist-racism-from-north-carolina-to-palestine/