Book Discussion – “The Muslims Are Coming”

MERI Book Club will feature discussion of “The Muslims are Coming”

When: Monday, May 9. 6-8PM
Where: Baba Ghannouj Mediterranean Restaurant, 5400 S Miami Blvd #138, Durham, NC 27703
Light snacks will be offered. Please RSVP by emailing at info@merinc.org if you can attend.

MERI (Movement to End Racism and Islamophobia) will facilitate a discussion of the book “The Muslims are Coming!: Islamophobia, Extremism and the Domestic War on Terror” by Arun Kundnani on Friday, May 9th, in Durham. This book investigates the role of foreign and domestic policies in promoting Islamophobia, the practice of entrapment and strategies to defeat Islamophobia.

We would welcome you to attend the book discussion even if you have not read the book. Here are some relevant links:

Review of “The Muslims are Coming”
“Kundnani provides detailed, well‑contextualised accounts of the entrapment of vulnerable African-American Muslims as well as the criminalisation of the (already traumatised) Minnesota Somali community (for its opposition to the US-backed Ethiopian invasion of Somalia). Arab-Americans, who had either identified as white or as a “model minority” (patriotic, bourgeois, less troublesome than black people or Latinos), suddenly found those options closing. In comedian Dean Obeidallah’s words, “I go to bed September 10th white, wake up September 11th, I am an Arab.” Anti-Muslim hysteria was whipped up by the media, the entertainment industry, and a state vocabulary that considered pipe bombs “weapons of mass destruction” when used by Muslims. Anti-Muslim violence in America increased by 50% in 2010.”
“Arun Kundnani is one of Britain’s best political writers, neither hectoring nor drily academic but compelling and sharply intelligent. The Muslims Are Coming should be widely read, particularly by liberals who consider their own positions unassailable. “Neoconservatism invented the terror war,” Kundnani writes, “but Obama liberalism normalised it, at which point, mainstream journalists stopped asking questions.””
http://www.theguardian.com/books/2014/apr/03/muslims-are-coming-islamophobia-extremism-domestic-war-on-terror-review

Islamophobia: Just the latest in the history of U.S. Imperialism. By Arun Kundnani
http://www.thenational.ae/opinion/comment/islamophobia-is-just-the-latest-in-a-history-of-us-imperialism 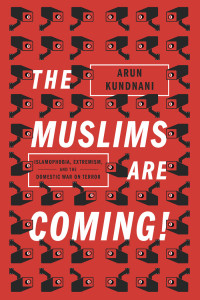