May Day Rally in Durham

May Day Rally in Durham

We call upon the people of North Carolina to take action to commemorate May Day, also called International Workers’ Day. Marked around the globe as a day of workers’ and people’s struggles, May Day is an opportunity for our many movements to stand united in solidarity, build our collective power, and express radical alternatives for the world. On May Day we champion a vision of a world of dignity, justice, and liberation for all people.

May Day is a revolutionary holiday that is celebrated around the world, but it has been actively suppressed here in the very country where it originated, the United States. International Workers Day commemorates the anniversary of the Haymarket Massacre in Chicago in 1886, where police opened fire on workers demonstrating for an 8 hour workday. Despite no evidence, seven labor organizers were sentenced to death for the incident.

This May Day is particularly significant, marking 10 years since a massive uprising of immigrants across the country in 2006 that revived this day as a day of struggle in the U.S. May Day demonstrations have been held every year since 1886 in cities all over the world and on six continents.

the Fight for $15 and a union for fast food, childcare, home care, municipal, and ALL workers,
demanding a “People’s Budget” led by UE 150, the NC Public Sector Union,
student/worker solidarity and occupation of the administration building at Duke University,
winning an union for adjunct faculty at Duke,
solidarity pickets with immigrants workers whose wages were stolen by the Marriott hotel,
campaigns to stop ICE raids and deportations in immigrant communities ,
the ongoing campaign for farmworker justice targeting Reynolds American Tobacco,
bold campaigns to end the war on Black America by demanding accountability for police murders and jailhouse deaths, and
militant QTPOC-led actions to oppose the anti-trans anti-worker HB2.
On May 2, we invite everyone to join us in Durham to center working-class struggles and the multi-racial, multi-gendered, and multinational working class movement. 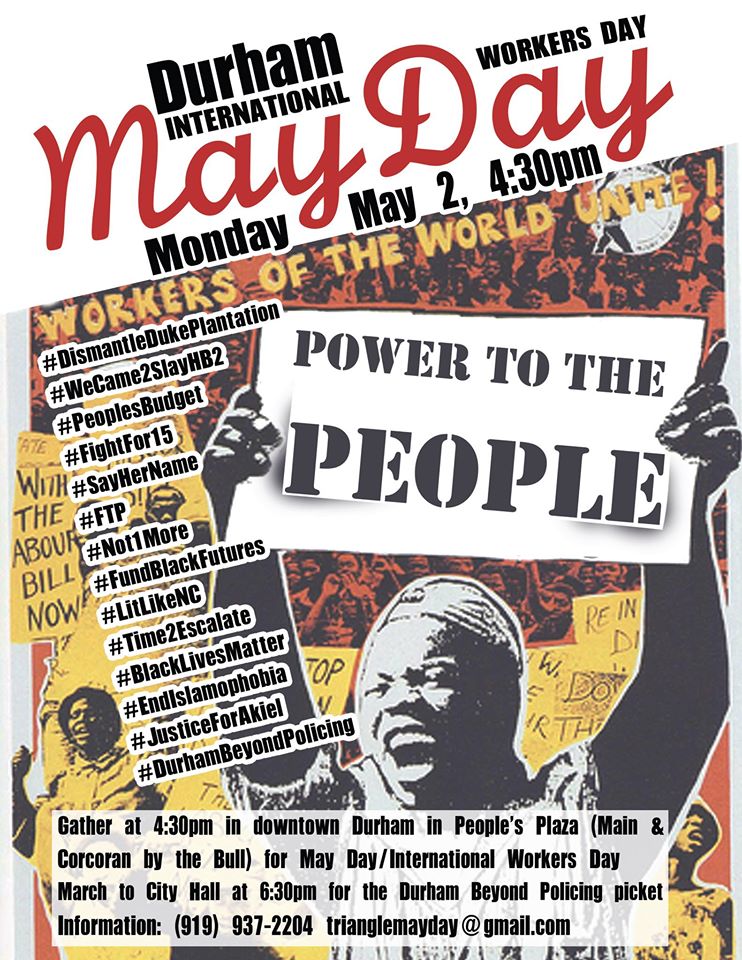