Anti-Muslim speaker, Bill Warner, was invited to speak at Pinehurst Country Club on May 15, 2016. He was invited by Moore Country Republican Women. Bill Warner has portrayed Muslim women wearing a hijab to KKK members donning clan outfit, criticized Muslim refugees’ resettlement in the USA, warned that Muslims can be “friendly” but never a “friend” and proposed a “war on Islam” as a solution to the “problem of Islam”. His virulence against Islam and Muslims has shocked people from all backgrounds.

There were multiple responses to Warner’s visit by community members in Moore County and beyond. An op-ed was published in Moore County based The Pilot, that challenged the visit by Warner:
“I’m disappointed to see that an organization such as the Moore Republican Women’s group is supporting such hate speech despite listing on the front page of their website that one of their core beliefs is “equal rights, equal justice and equal opportunity for all, regardless of race, creed, sex, age or disability.” How is hosting this controversial speaker holding true to your core Republican values when you are intentionally denigrating an entire group of people for their religious beliefs?”
http://www.thepilot.com/opinion/it-is-wrong-to-help-spread-hatred-against-other-groups/article_0a82a2a2-1941-11e6-b8e3-9f32effec54d.html

Moore County residents Paula Irene DeCarlo and Yasemin Kan organized a grassroots protest in response to Warner’s visit to Pinehurst on May 15th. They were joined with friends from different cities who protested outside the venue of speech. Protesters held signs that said “No to Racism, No to Islamophobia”, “To Learn the Truth of Islam, Ask a Muslim”. Raised as a Catholic, Paula emphasized the need to promote peaceful coexistence through learning, art and creativity. Her son produces music to confront bigotry and racism. Yasemin, a native of Turkey, is dedicated to challenge demonizing and dehumanizing of Muslims. Their actions have inspired many members to speak up against Islamophobia.

Moore County Democrats organized a talk titled “Challenging Racism and Islamophobia” on May 16, 2016. Manzoor Cheema from the Movement to End Racism and Islamophobia spoke at  the event. This was a non-partisan talk open to people of all or no affiliations. Participants reflected a great diversity, ranging from educators, financial professionals, artists, military veterans and public officials. The Q&A session dealt with many questions about Islam; connections between Islamophobia, anti-Black racism and other forms of oppression; and how to challenge these oppressions. 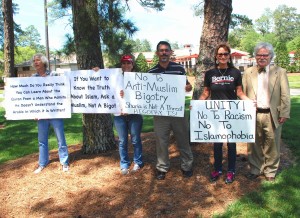 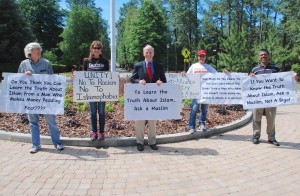 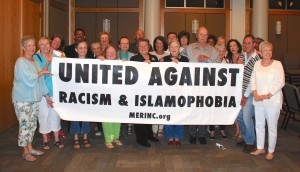