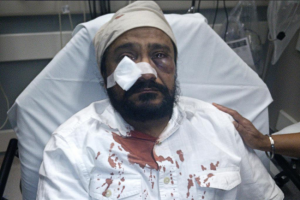 Sikhs are one of the biggest victims of physical assaults related to Islamophobia since 9/11. The following are details about an attack against a Sikh resident of Chicago on September 8, 2015.

Mr. Mukker, a 53-year-old Sikh American and father of two, was viciously beaten in his car after being called racial slurs such as “Bin Laden,” while on his way to the grocery store in the Chicago suburb of Darien on Tuesday, September 8th. After initially not filing hate crime charges on Friday, the Sikh Coalition met and reviewed evidence with the DuPage County State’s Attorney’s Office on Monday. That meeting catalyzed the decision to file a hate crime charge in the case on Monday.

“The United States is my country. I am an American – and no American should be judged or attacked because of the color of their skin or their religion,” said Mr. Mukker at the press conference this morning.”

Muslims and Jews in Louisville, Kentucky, plan to join together Friday after several anti-Islamic messages were spray-painted in red on a mosque this week.

The hate-filled graffiti was first spotted Wednesday at the Louisville Islamic Center, and includes the messages, “Nazis speak Arabic,” “Moslems — leave the Jews alone,” and “This is for France,” a possible reference to the Islamic terrorist attack on a Paris-bound train last month and the massacre at the offices of French satirical magazine Charlie Hebdo in January. 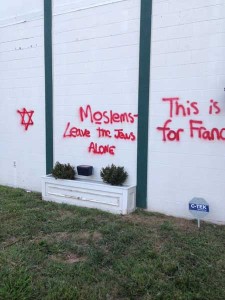 When Ahmed Mohamed went to his high school in Irving, Texas, Monday, he was so excited. A teenager with dreams of becoming an engineer, he wanted to show his teacher the digital clock he’d made from a pencil case.

The 14-year-old’s day ended not with praise, but punishment, after the school called police and he was arrested.

“I built a clock to impress my teacher but when I showed it to her, she thought it was a threat to her,” Ahmed told reporters Wednesday. “It was really sad that she took the wrong impression of it.”

Ahmed talked to the media gathered on his front yard and appeared to wear the same NASA T-shirt he had on in a picture taken as he was being arrested. In the image, he looks confused and upset as he’s being led out of school in handcuffs.

“Fear and hatred of Muslims was on public display in Spotsylvania County at a meeting concerning the building of a new mosque.
At least two men went on racist rants, shouting down the speaker and calling all Muslims terrorists.
Some of the people in the meeting were concerned the Mosque would take in refugees from Syria. The main instigator at the meeting continued to shout at Shalaby.
A Sheriffs deputy broke up the meeting, after it was clear, the insults were not going to stop.”