Friends of Raleigh community member Abdoulie Sowe have called a press conference to demand that he be released from ICE detention and returned home to his family.

The Movement to End Racism and Islamophobia, Muslims for Social Justice, and the North Carolina Gambian Association will gather at 4PM Thursday, December 13th at the Federal Building. The organizations are calling on Representative David Price and Senator Thom Tillis to advocate on Sowe’s behalf. They are also calling on ICE Atlanta Director Sean Gallagher to grant Sowe’s Stay of Removal and return him to his family.

Sowe has lived in Raleigh for over 25 years, and he is the father of three children and the primary breadwinner in the family. His youngest daughter, age 6, has special needs.

Sowe been held in immigration detention at Stewart Detention Center for the last three months. His family is also concerned about his physical health: Sowe suffers from kidney disease, diabetes, and hypertension, and he was a recipient of a kidney before his detention — and missed necessary anti-rejection medicine during his detention at Stewart Detention Center. If deported, Abdoulie cannot receive the medical treatment he needs to stay alive.

WHAT: A press conference with speakers including Sowe’s family members and representatives of various community organizations.

WHERE: The Federal Building in Raleigh, 310 New Bern Ave.

Movement to End Racism and Islamophobia is a North Carolina-wide network which stands and acts together against all forms of Islamophobia and racism. MERI understands both Islamophobia and racism within a framework that sees how discrimination based on race, class, gender, sexuality, ability, and religion are part of multiple, interlocking forms of oppression that reinforce and sustain one another. More information and a list of partner organizations are available at https://merinc.org.

Muslims for Social Justice is a North Carolina based organization dedicated to human rights and social justice for all. MSJ believes in the empowerment of the marginalized, grassroots democracy, economic & environmental justice, respect for diversity, and responsible local & foreign policy. Read more at http://muslimsforsocialjustice.blogspot.com/

North Carolina Gambian Association can be found at https://www.facebook.com/North-Carolina-Gambian-Association-589471694462274/. 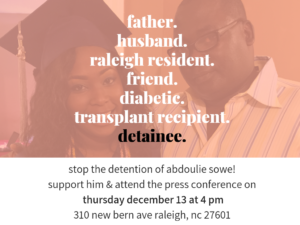 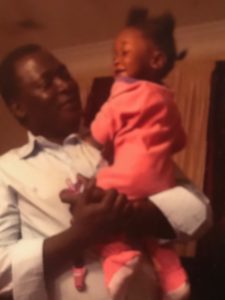 Abdoulie with his daughter, Mariam. Mariam has special needs and needs her father at home. 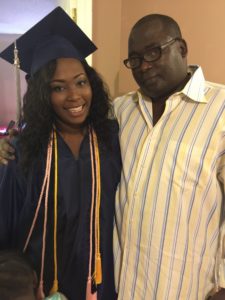 Abdoulie Sowe with his daughter Fatima