Statement on Orlando Massacre from Salma Mirza, a queer Muslim who is a member of Movement to End Racism and Islamophobia (MERI) and Muslims for Social Justice

I am heartbroken about this attack on my community, as most of those killed were LGBTQ people of color. The flyer for the event was of Black and Latina trans women and we have a national climate that targets these communities.

As a queer Muslim, I watched the story unfold in shock and grief. I’ve been dancing in those clubs. My friends have been in those clubs. It could have been any one of us. Those clubs are one of the few places we can feel free. As I’ve been trying to process and grieve this tragedy, I see Donald Trump using this tragedy to renew his call for a ban on Muslims. Before the bodies have been taken out of the building, before all their loved ones have been contacted, it’s already been used to justify hatred against Muslims. The killing of my people is being used to justify the killing of my people.

I am horrified that this tragedy is being used to call for restrictions of the civil liberties of Muslims. While the Muslim community may need to struggle with homophobia, so too does our country. In the first 10 weeks of 2016, over 200 pieces of anti-LGBT legislation were introduced in 34 states. The day after HB2 passed, I got arrested in front of the Governor’s mansion with other queer and trans people fighting that attack on our community. As my queer Tennessean friend Thomas Walker said, the queer people of color trapped in Pulse hid in whatever bathroom they thought they were most likely to survive in, not whichever one matched their birth certificate. The right-wing is passing bills attacking trans people in bathrooms while trans people hid from their killer in the Pulse bathroom to try and survive. There was a white guy that they caught in LA on his way to LA Pride with guns and ammo and bomb-making equipment. Like him, Omar Mateen was an American. Donald Trump may say he’s foreign-born, but he was born in New York. He was a fan of the NYPD. He is a home-grown criminal. America as a whole needs to struggle with hatred and fear of LGBTQ people.

Mateen was a domestic abuser, like another killer, George Zimmerman. Despite this, he had no criminal record. As we’ve seen in the Stanford rape case, toxic masculinity is an American problem. He was born and socialized in America. He internalized these lessons.

Mass shootings are an American problem, not an “over there” problem. There have been 136 instances of mass shooting in 2016 alone. More than 400,000 people have died from gun violence in the past 10 years. The overwhelming majority of shooting deaths in the United States are committed by non-Muslims. This is an American problem, when shooters like Omar Mateen have access to buying assault style rifles. No one should have access to buy these guns that are often used in mass shootings. We need common sense gun control in this country.

At Movement to End Racism and Islamophobia (MERI), we believe in building an intersectional movement to fight all forms of oppression – homophobia, Islamophobia, racism, sexism, attacks on workers, attacks on immigrants and all other oppressions. Hatred will win only if we are divided by fear. We want to build a powerful movement based on love and liberation for all people. We call upon people from all backgrounds to join our network and help us build a more loving and just community. 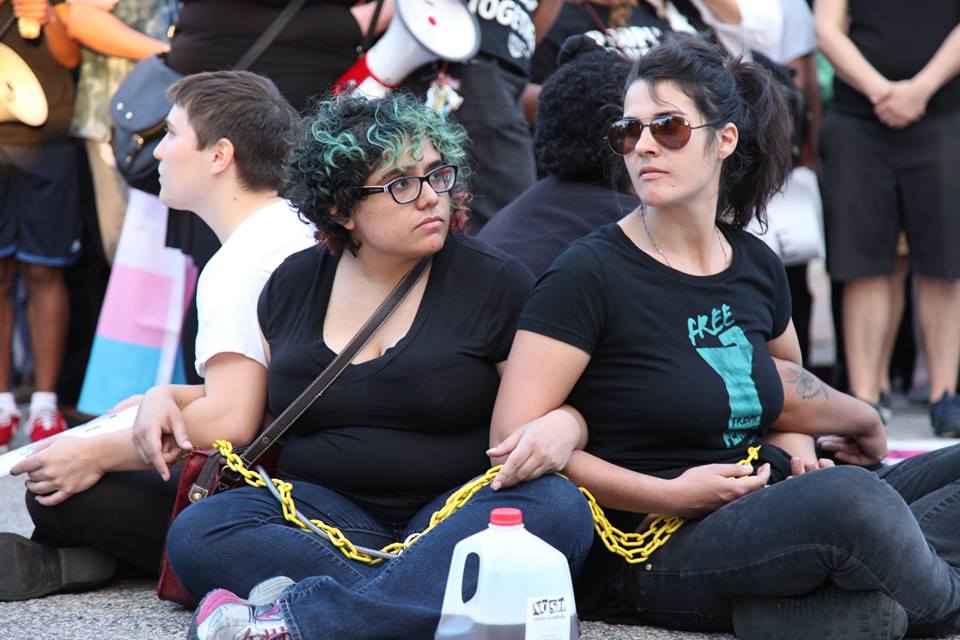 (From left) Noah Rubin-Blose, Salma Mirza and Jade Brooks, during a protest against House Bill 2 in front on North Carolina Executive Mansion on March 24, 2016.
Photo by Matthew Lenard