UUFR congregants are active in the social justice and peace movements. Learn more about their work here.
“The fight for women’s suffrage; the struggle for civil rights; war resistance; relief efforts from New Orleans to Darfur: Unitarian Universalists have historically been part of the fabric of our nation’s great social justice movements. Our belief system is grounded in an active commitment to peace, fairness, equity, and compassion. Social action is the vehicle through which we express that commitment.”

What is Islamophobia?
Islamophobia is a contrived fear or prejudice fomented by the existing Eurocentric and Orientalist global power structure.  It is directed at a perceived or real Muslim threat through the maintenance and extension of existing disparities in economic, political, social and cultural relations, while rationalizing the necessity to deploy violence as a tool to achieve “civilizational rehab” of the target communities (Muslim or otherwise).  Islamophobia reintroduces and reaffirms a global racial structure through which resource distribution disparities are maintained and extended.
Source: Center for Race and Gender at UC Berkeley

Here is a Youtube video of speech at UUFR: 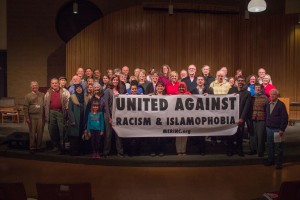