South Asian and People of Color students at the University of North Carolina at Chapel Hill  hosted a talk on Islamophobia and racism on April 18, 2016. MERI’s member, Manzoor Cheema, made the presentation. This talk took place in a class taught by Anisha Padma and Aisha Anwar. This talk explored rooted of Islamophobia in racism and colonialism, and identified action to defeat this oppression. This talk included discussion on structural and institutional basis of Islamophobia and what is required to abolish Islamophobia. Some of student organizations represented during the discussion included UNC Monsoon, Queer Trans People of Color and Campus Y.

About MERI:
Movement to End Racism and Islamophobia is a network which stands and acts together against all forms of Islamophobia and racism. We are living in an environment in which the media and other forces are inciting prejudice and hatred against Islam and Muslims. This hate is being targeted against both Muslim individuals and entire groups perceived as Muslims. We understand both Islamophobia and racism within a framework that sees how discrimination based on race, class, gender, sexuality, ability, and religion are part of multiple, interlocking forms of oppression that reinforce and sustain one another.
https://merinc.org/mission-statment/

About UNC Monsoon
Monsoon seeks to fight both the misrepresentation and underrepresentation of South Asia in mainstream media by producing original content that informs, entertains, and also fosters discussion. It provides a platform for South Asian voices to share real stories, revealing the immense diversity our community boasts.
http://monsoon.web.unc.edu/
https://www.facebook.com/uncmonsoon/info/?tab=page_info 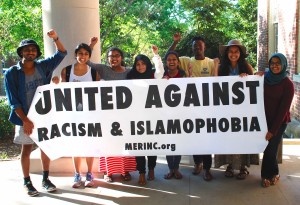